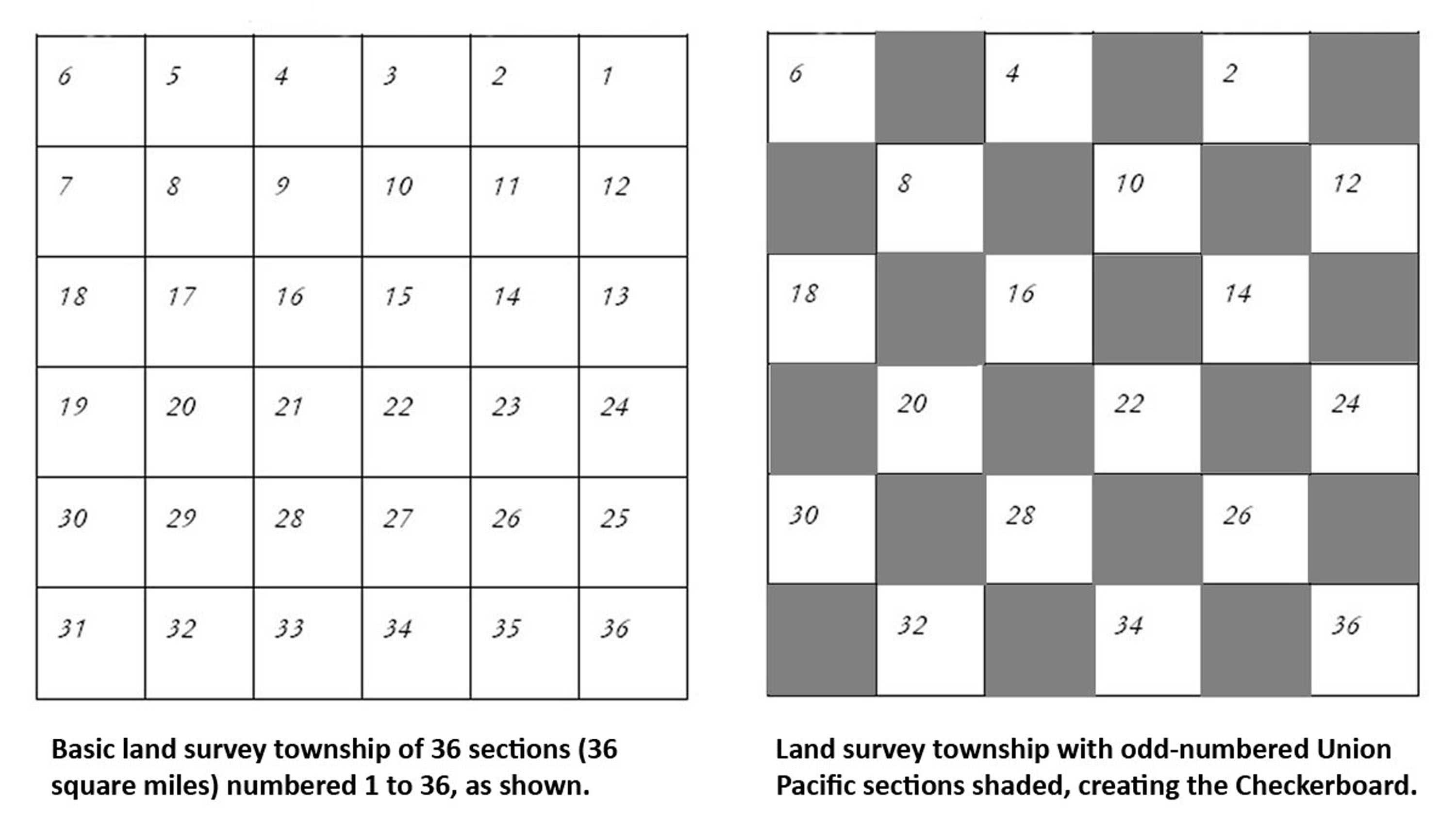 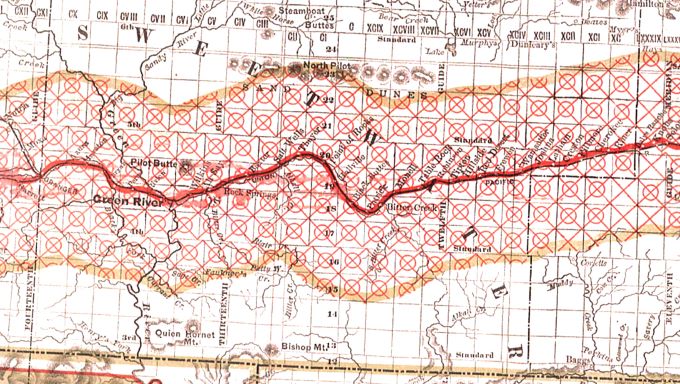 Graphic #1 - The township of 36 square miles is a fundamental unit of land area measurement, and was used to create the Union Pacific Checkerboard

Graphic #2 - The Union Pacific Checkerboard, as it extended along the Transcontinental Railroad across Wyoming

Graphic #3 - The Checkerboard in Sweetwater County. The 1901 map’s legend marks the majority of its townships as “All or Part for Sale.”

Graphic #5 - The Union Pacific Checkerboard today, as it appears on the Sweetwater County website as a detailed interactive map

(Sweetwater County, Wyo. - July 23, 2022)     A vintage railroad land grant map recently examined by the staff at the Sweetwater County Historical Museum is a reminder of how the events of a century and a half ago still effect our lives today. Case in point:  the Union Pacific Checkerboard.

The Transcontinental Railroad, extending across the American west from Omaha, Nebraska, to San Francisco, was officially launched on July 1, 1862, when President Abraham Lincoln signed the Pacific Railway Act. On paper, the plan was simple:  the Central Pacific Railroad of California would lay track east from California, and the newly-created Union Pacific Railroad would work west from Omaha, Nebraska, until the two met on May 10, 1869, at what would become famous as Promontory Point, Utah, thereby linking the east and west by rail. The Union Pacific line passed across the entire length of southern Wyoming, from Cheyenne to Evanston. Ultimately, the Central Pacific constructed 690 miles of track and the Union Pacific 1,085 miles.

The project was enormous in its scale, arguably the most iconic construction operation in American history, with a cost to match. In addition to a $27 million government loan - over $783 million in 2022 dollars - the railroads were granted first 10, then 20 one-square-mile sections of land for each mile of track laid, creating a checkerboard of odd-numbered sections for an average of 20 miles on each side of the tracks. In this manner, in Wyoming alone the Union Pacific was ceded in excess of 4,500,000 acres.

The graphic shown here helps explain the process. A basic unit of land survey area measure is a township, a square of six miles by six miles for a total of 36 square miles, or 36 sections. Each one-square-mile section contains 640 acres. A township’s sections are numbered from 1  to 36, from east to west, then west to east, then repeated twice more. The odd-numbered sections went to the Union Pacific, while the U.S. government retained the even-numbered sections. When the U.P.’s sections are shaded, the areas so mapped resemble a checkerboard.

The Union Pacific Checkerboard continues to exist today as it was originally laid out, though most of the land ownership, aside from Bureau of Land Management sections, has changed.

Today much of the Checkerboard acreage belongs to agricultural interests or oil and gas industry operations.

The Sweetwater County Historical Museum is located at 3 E. Flaming Gorge Way in Green River. Hours are Tuesday through Saturday, 9:00 AM to 5:00 PM, and there is no charge for admission.