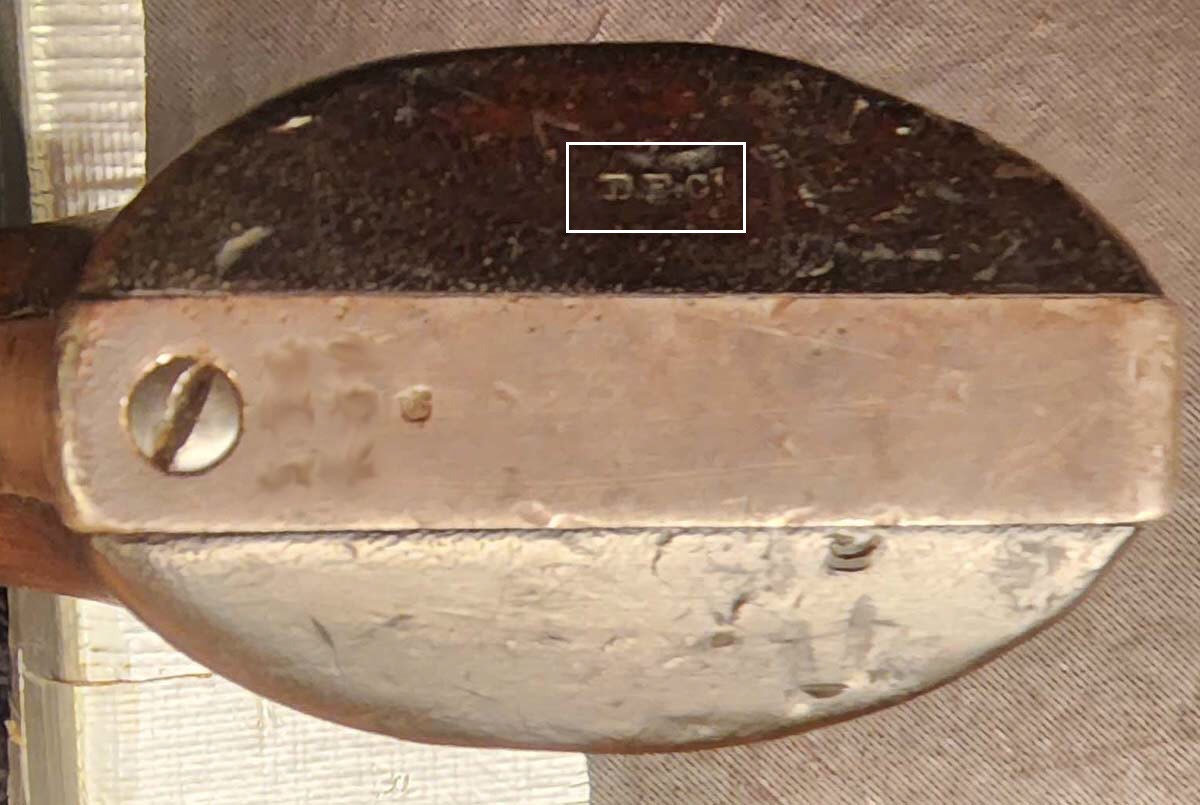 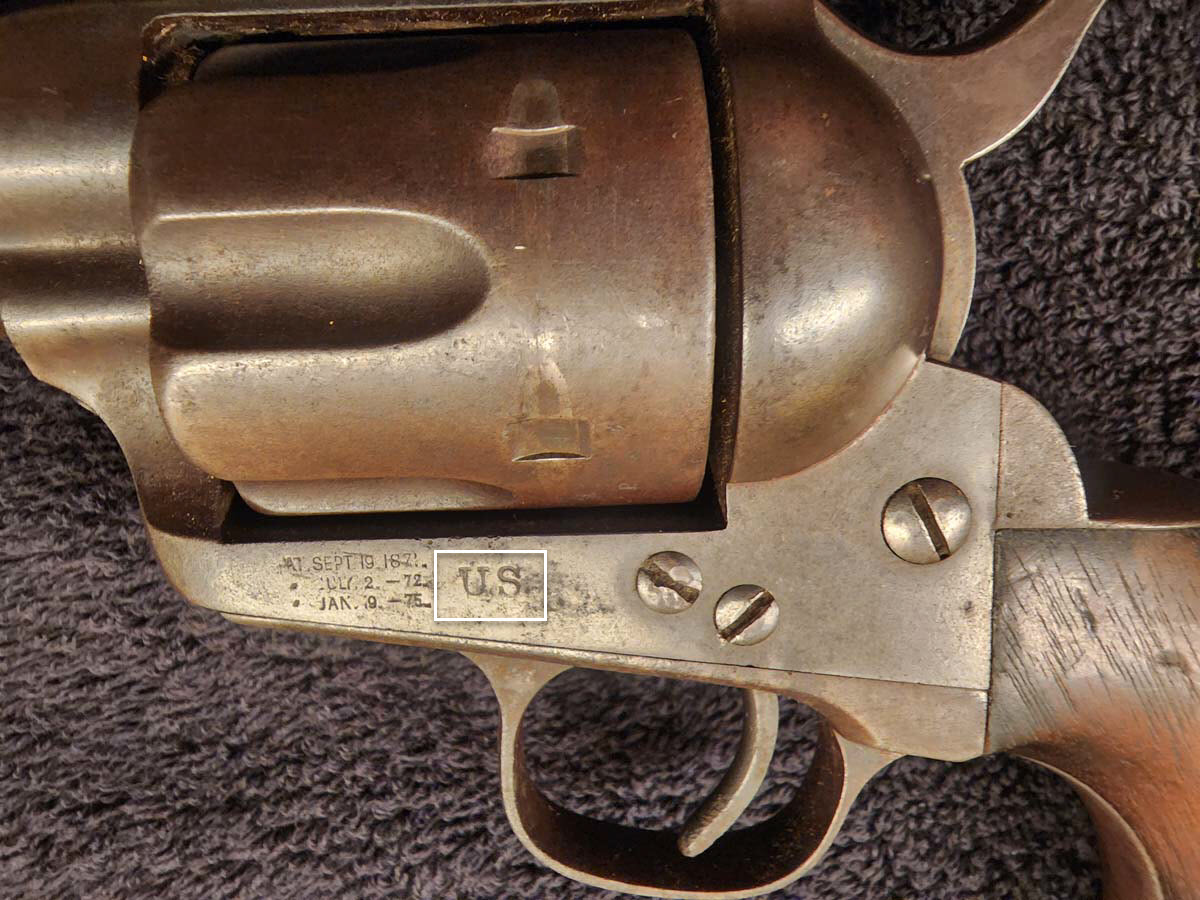 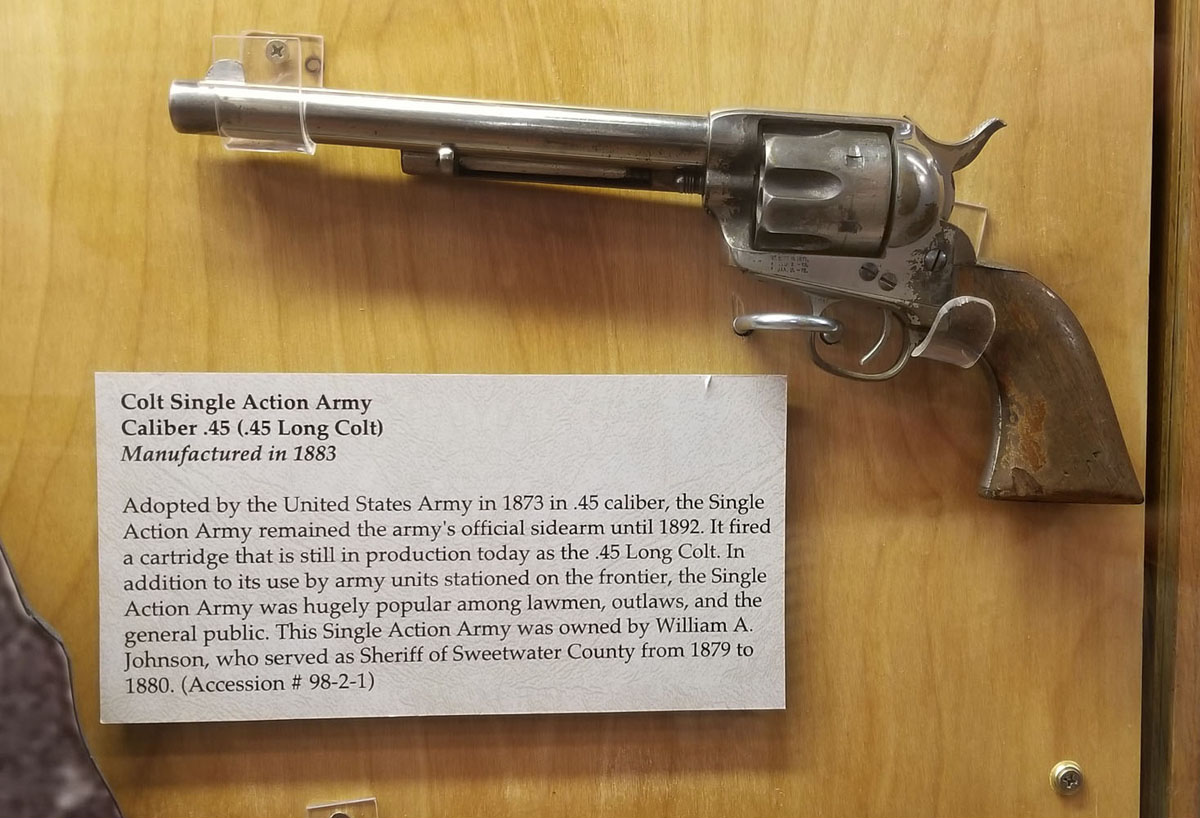 Photo #2 - The initials “DFC” identify the Colt’s inspector, David F. Clark, who served at the Springfield Armory, in Springfield, Massachusetts, from 1880 to 1887.

Photo #4 - Single Action Army revolver on exhibit at the Sweetwater County Historical Museum, once the property of Sheriff William Johnson.

Museum staff determined the old pistol to be a Colt Single Action Army single-action revolver with a barrel length of 7½ inches. Based on its serial number it was assessed as being manufactured in early 1885.

Needing to replace its percussion revolvers and cartridge-converted percussion revolvers, in 1872 the U.S. Army held revolver trials. The design selected was that submitted by Colt, created by William Mason and Brinkeroff Richards. As adopted, the new handgun, officially designated the  “New Model Army Metallic Cartridge Revolving Pistol,” was chambered for the then-new .45-caliber cartridge and fitted with a 7½” barrel. It was formally adopted in 1873, remained the official Army issue sidearm until 1892 and, unofficially, remained in limited service for a good many years thereafter. It became available for civilian purchase not long after the Army adopted it and was hugely popular. (The 7½-inch barreled SAAs came to be known as the “Cavalry Model.”  Other barrel lengths, particularly 3", 4¾" and 5½,” were also favored by the civilian market.)

This Colt proved to be a military issue, as evidenced by the “U.S.” stamp on the left side of the frame. During that era, the practice was for a military sub-inspector to inspect all military firearms. These  sub-inspectors were civilian employees of the Springfield Arsenal. The bottom left-hand grip of this gun was noted to be stamped “DFC,” which were the initials of David F. Clark, the sub-inspector who examined it. (Clark so served from 1880 to 1887.)

Guns like the old Colt are becoming more and more valuable. Five years ago, a military-issue Single Action Army nearly identical to the pistol recently researched by museum staff sold for a little over $8,000 on the Rock Island Auction website. (For details, go to

And there are true Cinderella stories in the world of vintage firearms, such as the case of Paul Pasko who, in the 1960s bought was thought to be a run-of-the-mill Single Action Army that turned out to be a bonafide Bat Masterson gun that sold at auction last year for just over $375,000!  (See https://www.bonhams.com/auctions/27262/lot/14/ .)

Those with a vintage firearm (or firearms) who would like to learn more about them are encouraged to contact the museum at (307) 872-6435 or via email at This email address is being protected from spambots. You need JavaScript enabled to view it. . There is no charge for the service.