Join us for this month's board meeting using the link below. This month's meeting is scheduled for December 21. Board meetings typically occur the 3rd Wednesday of the month at 5:30 PM:

Please join my meeting from your computer, tablet or smartphone.

You can also dial in using your phone.
(For supported devices, tap a one-touch number below to join instantly.)

Get the app now and be ready when your first meeting starts: https://meet.goto.com/install 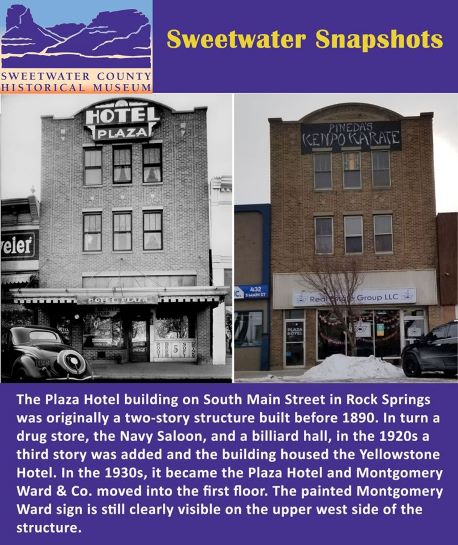 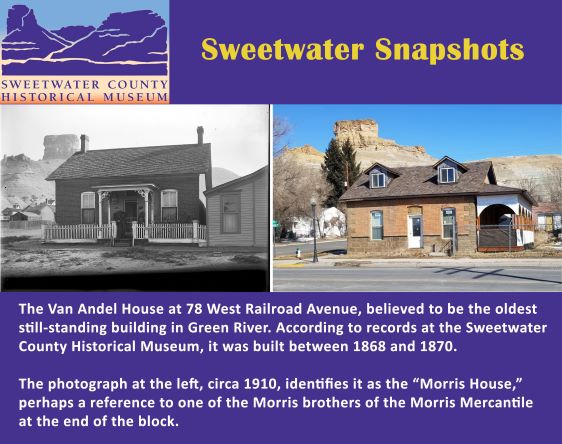 A Symbol of Community and Prosperity

(Originally printed in the Green River Star November 25, 2014 as part of the Echoes From the Bluffs series written by members of the Green River Historic Preservation Commission from 1998 to 2017. This article won a Wyoming State Historical Society Publications Award in 2018. All Echoes From the Bluffs articles have been compiled into a series of four books, all of which are available for purchase in the museum store or online at Amazon.com.)

One hundred and ten years ago, in 1904, there began a call to action by the citizens of Green River for a bigger, better passenger station (depot) building—one that would accurately represent the size and success of Green River. “It has been the misfortune of Green River to have a few ‘knockers’ who could see no future for the town; and who have prophesied the final abandonment of the place,” the Wyoming Star reported in January of 1904. It was not a lack of industry that was killing Green River, a citizen’s group claimed, it was a lack of vision. The railroad was the major industry of the town, the depot the first thing people saw when traveling to Green River. As a symbol of civic pride and community engagement, what the town needed to bring citizens together, encourage economic development, and show the world Green River’s social and industrial prosperity was to replace the tiny existing depot with an appropriately grand structure. 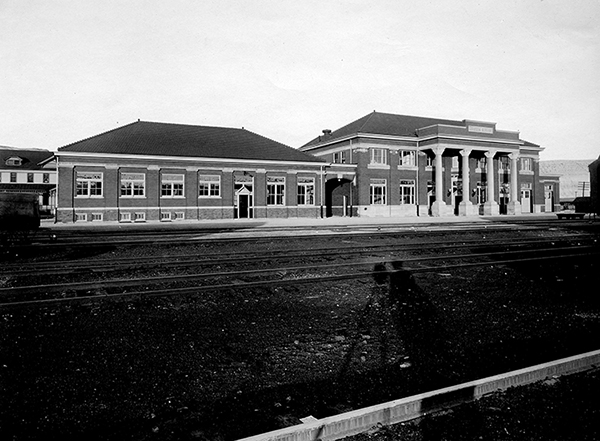 Green River’s new passenger depot was built in 1910 after a group of concerned citizens rallied together to petition the Union Pacific.

This was all brought about because some people were saying Green River was dying. The Union Pacific was going to abandon Green River for Granger, they thought. People had for years heard rumors that the U.P. shops would be moving to Granger (along with all the jobs). Whether this threat to Green River was real or not, it got people’s attention.

This threat to Green River’s survival was not the first, nor the most genuine. Even in its earliest days as a railroad boomtown, the U.P. picked up and moved all operations to Bryan for three years from 1869-1872, threatening to essentially wipe Green River off the map. The U.P. had grown quite accustomed to the wide berth the U.S. government had given them as far as claiming and developing land in the vastly undeveloped and unpopulated West (by people of European descent anyway). When they got to Green River and discovered what they considered to be “squatters” already on “their” land, they moved on to Bryan. But, water was essential to building a railroad in West. When the Black’s Fork River dried up at Bryan, the U.P. was forced to move back to Green River and negotiate with those who had already made claims on the land. If not for the drought that year, we’d all possibly be living in Bryan today. 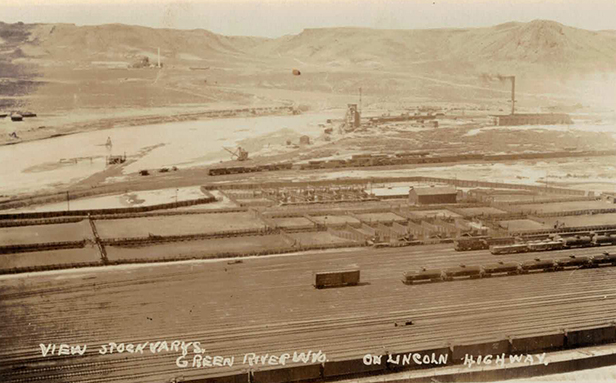 The stockyards at the east end of Green River’s railyards, ca. 1920.

But the railroad did stay and Green River grew. Along with the growth of the railroad, several other industries developed in the late 1800s that employed Green River citizens including the early potash and soda works, livestock and farming, ice harvesting from the Green River, and the floating of railroad ties and mine equipment down the river. And with the establishment of Green River as the eastern terminus of the Oregon Short Line along the U.P. main line, Green River’s future was all but secure for the foreseeable future. Yet, in 1904, the citizens were sensing a lag in their town. This appears to be more of a lag in morale and disappointment in how Green River was represented to the outside world than an actual economic lag.

Five years and several thwarted plans and requests later, in April of 1909, the Green River Star reported that all the members of the Commercial Club, along with several landowners, had signed a petition that was sent to the U.P. demanding a new depot building. In part, the petition stated:

We, the undersigned citizens of Green River, Wyoming, respectfully petition for the immediate construction of a railroad station that will meet the demands of one of the most important divisions on the Union Pacific and Oregon Short Line systems. The delay in meeting this demand has been a serious drawback to the growth of our city…We have a commodious Court House, a handsome Carnegie Library, a newly constructed Union Pacific Club House, and the promise of a federal post office building…if the Union Pacific will at an early date construct a suitable railroad station it will be a substantial proof that they are interested in the improvement of Green River, and be highly appreciated by its citizens.

As proof of Green River’s importance, it was only two months later that Mayor Hugo Gaensslen announced that he had received word that a new depot building had been approved. A month after that, teams of men were already at work moving the U.P. Hotel across the street in order to make room for the larger depot. The news sparked a marked growth in businesses and beautification efforts around the depot including more than 20 new buildings complete with concrete sidewalks (replacing wooden ones), coping on the streets of the residential areas, and a lawn for the U.P. Club House. Already investing in Green River’s future, the U.P. also improved and expanded the roundhouse with a new electric turntable and installed a $90,000 coal chute. As a major railroad town, the area around the passenger station was the hub of the community. These efforts to grow and beautify the area around the depot were not simply to impress visitors, but also to create a centralized social and economic hub for the citizens of Green River.

Finally, after years of efforts to beautify, expand, and develop Green River into a world-class city, the final symbol of its coming-of-age felt complete. Among the town’s selling points could also be counted an electric lighting system, fire and sewer services, and lots of trees. The depot, second in size only to Cheyenne, was huge. The impressive redbrick building consisted of three wings, the central wing being two stories tall and fronted by a 40-foot-long colonnade and arched entranceways. Inside, the building offered both travelers and locals a variety of services including dining room, a café, separate men’s and women’s waiting rooms, bathrooms, ticket office, baggage rooms, and various offices for employees and passenger services. 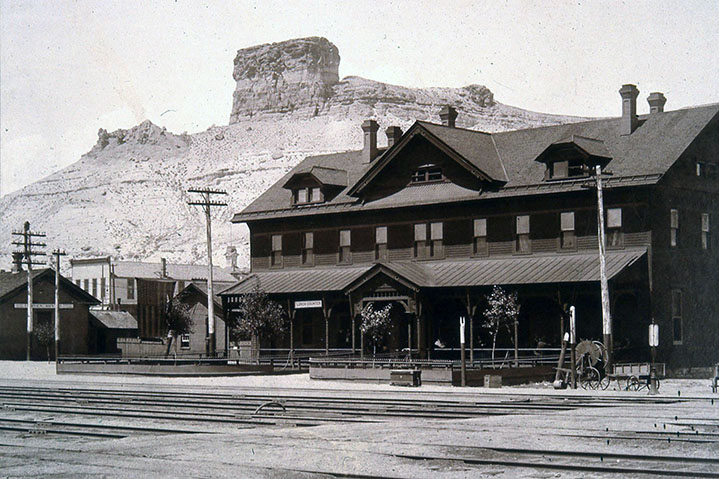 The Union Pacific hotel was moved across the street to the north side of Railroad Avenue, as seen here, to make room for the larger depot building

Not only did the new depot bring in new business to accommodate extra passengers the welcoming structure would surely attract, it also brought in jobs. On October 15th, 1910, the U.P. offices in Ogden officially moved into the depot in Green River due to its central location on the line. The Green River Star reported on October 21st that although some U.P. employees were unhappy about having to leave their homes in Ogden, the majority were “agreeably surprised at our progressive little city” and of course the larger offices in Green River’s new depot building. In the 1940s, the well-recognized “crow’s nest” lookout tower was added to the roof to enable employees to see the entire rail yard. Most U.P. employees call this simply “the tower.”

In the 1960s, the interior was dramatically altered to turn the lower floor into offices. Recently, the City of Green River acquired the depot building from the U.P. with now much publicized plans to renovate it and turn it into a multi-use building to bolster community and economic development in downtown.

The building turned 104 years old in October and just as in 1904, Green River has a business district struggling to survive amidst rumors of the city’s demise. In 1910, the depot brought economic and social development to a city that needed it, but that only happened because the citizens actively came together as a community and were determined to improve their city. With the support of the community, the depot can once again be an epicenter of downtown development and a symbol of Green River’s civic pride.