A Green River man served as a top non-commissioned officer in one of the three horse cavalry “Rough Rider” units created for the Spanish-American War in 1898.
Frank Kidd was First Sergeant of Company F, 2nd Volunteer Cavalry Regiment, commanded by Colonel Jay F. Torrey of the Embar Ranch west of Thermopolis, known as “Torrey’s Rough Riders.”
Congress authorized formation of the 1st, 2nd, and 3rd Volunteer Cavalry regiments for the war against Spain and called for outdoorsmen from the west to man them, including cowboys, blacksmiths, lawmen, miners, hunters, and Native Americans. The 1st Volunteer Cavalry, commanded by Colonel Leonard Wood and Lt. Colonel Theodore Roosevelt, was dubbed the “Rough Riders” by the press, and the nickname carried over to the other regiments as well.
Of the 842 troopers in “Torrey’s Rough Riders,” nearly 600 were from Wyoming. Most of the men in Company E were from Weston, Sheridan, or Crook counties, Albany County provided men for G Company, and Company F was made up primarily by men from Sweetwater and Laramie Counties. Troopers from Nevada, Colorado, Idaho, and Utah also served in the regiment.
The regiment was officially formed at Fort D. A. Russell (now Warren Air Force Base) in Cheyenne in May, 1898. After a period of intensive training, the 2nd was ordered to Jacksonville, Florida, a staging area for troops enroute to Cuba. On June 26, however, the two trains carrying the troopers and their horses were involved in a major crash near Tupelo, Mississippi. Five men were killed and 15 were injured. After several days’ delay, the regiment finally arrived at Jacksonville, but the war ended before it could be deployed to Cuba.
Though it saw no combat, the regiment lost over 30 men to Typhoid fever in Jacksonville. With the war over, it returned to Fort D.A. Russell, were it was mustered out in October, 1898.
In 1900, Kidd married Maria “Mayme” Viox, whose father owned a meat market on Railroad Avenue in Green River. Over the years, he served as town marshal, undersheriff of Sweetwater County, worked as a carpenter, and was also employed at the Post Office, now the home of the Sweetwater County Historical Museum.
Frank Kidd died in 1954. Mayme lived to be 101, passing away in 1981. 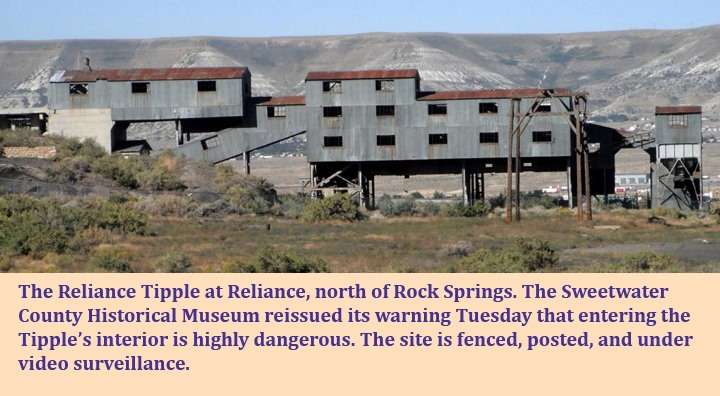 The Sweetwater County Historical Museum is once again issuing a warning about the dangers of going inside the Reliance Tipple, north of Rock Springs.

The Tipple is a familiar Sweetwater County landmark. Built in 1910 and used until 1936, it was used to sort coal mined in the Reliance area for shipment.

The Tipple is on county property and listed on the National Register of Historic Places. It is fenced and posted and the museum maintains a video surveillance system inside the structure. The presence of several trespassers inside the Tipple recently activated the surveillance system and their images were recorded and turned over to the Sweetwater County Sheriff’s Office for follow-up investigation.

The Tipple’s exterior may be toured, but structural conditions inside it are highly unsafe.

www.tourwyoming.com/…/sightseeing-and-…/reliance-tipple.html , no one should go inside the structure. A 3d digital scan can be found at: https://www.youtube.com/watch?v=rFuriKDeSoE.