2019 marks the 134th Anniversary of the Chinese Massacre 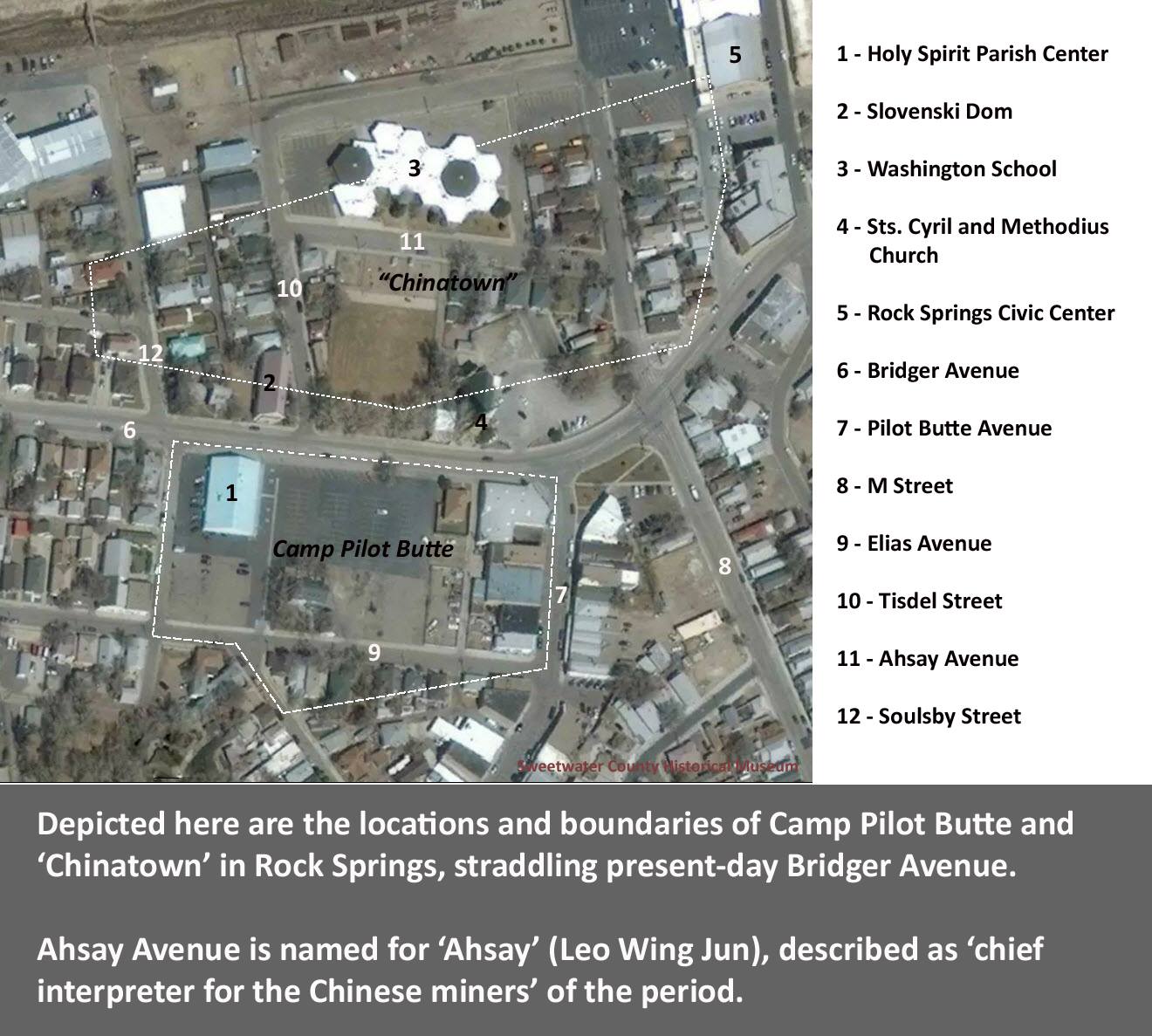 Monday is Labor Day, a holiday for barbecues and outdoor activities, but it also marks the anniversary of the darkest chapter in Rock Springs history: the Chinese Massacre of September 2, 1885.

By the summer of 1885, there were just under 600 Chinese and less than half that number of white miners working in the coal mines in and around Rock Springs. Tensions were high because the Chinese miners were willing to work for lower wages, which kept overall wages down and created resentment among the white miners.

On the morning of September 2, at the Number Six mine just north of Rock Springs, a fight between white and Chinese miners resulted in the death of a Chinese worker. Later in the day, a mob of about 150 white miners attacked "Chinatown," the section of town north of Bitter Creek where the Chinese miners lived, and set it on fire. More than two dozen Chinese were killed and the rest fled. All 79 of the Chinese shacks and shanties were destroyed by the mob.

To restore order and protect the hundreds of Chinese miners soon to be returned to Rock Springs under heavy army escort, Territorial Governor (and later United States Senator) Francis E. Warren arranged for soldiers of the 7th U.S. Infantry Regiment to establish a base sited between “Chinatown” and downtown Rock Springs. A new “Chinatown”was hastily built, the miners returned to work, and, by November 30, 532 Chinese and 85 white miners were producing about 1,600 tons of coal per day.

The army’s new post was dubbed Camp Pilot Butte and continued to be garrisoned until March of 1899, when the base was closed.

The Sweetwater County Historical Museum in Green River features a special exhibit on the Chinese Massacre, and "The Chinese Massacre at Rock Springs, Wyoming Territory, September 2, 1885," by Isaac H. Bromley, an excellent work on the subject, is available at the museum bookstore.

See more pictures and share this article with your friends on Facebook here.Follow us on Facebook for more fascinating history and stay up to date on all the Museum's events. 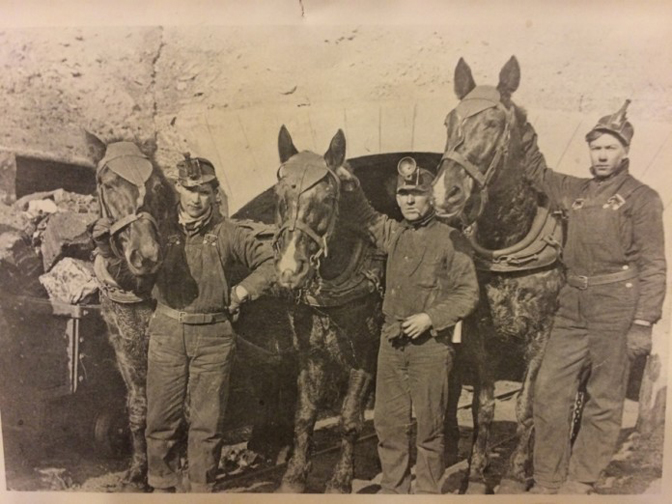 The release of a new book of local history will be featured at two upcoming book-signing events in Green River and Rock Springs.

Sweetwater Women, by Christine Alethea Williams and Brigida Blasi, profiles the lives of over 100 women who figured prominently in Sweetwater County history. Among them are:

• Dorothy Krasovec (Rock Springs), a World War II WASP pilot.
• Ida Gasson (Green River), President of the State Bank of Green River from 1932 to 1953, the only female bank president in Wyoming of her time.
• Elinore Pruitt Stewart (Burntfork), whose writings about her life as a homesteader, Letters of a Woman Homesteader, and Letters on an Elk Hunt, are still top sellers. (The 1979 movie Heartland, starring Conchata Ferrell and Rip Torn, is based on her life in Sweetwater County.)
• Bessie Crouch (Dines), a black woman who defied racism by refusing to sit in a segregated back row at the Isis Theater in Green River.
• Liesel Stern Shienberg (Rock Springs), who escaped the Nazi persecution of Jews in Germany as a child and settled in Rock Springs.
• Catherine Chaussart (Superior), the first female County Commissioner in Sweetwater County, who served in that capacity from 1953 to 1961.

Pioneers, judges, artists, educators, librarians, business owners, journalists, medical professionals... and one brothel keeper. Sweetwater Women is an engaging study of just some of the women who made a difference in southwest Wyoming.

The first event, Sweetwater Women’s official launch and book signing, is set for 6:00 PM on Thursday, July 18, at the Tomahawk Hotel in Green River. Williams and Blasi will be there, as will a special guest speaker: historian and rancher Ann Chambers Noble of Cora.

Noble received a B.A. in history from Bowdoin College and a M.A. in history from the University of Utah. She has published extensively on Wyoming history topics, and currently serves on the boards for the University of Wyoming's American Heritage Center, Buffalo Bill Center of the West's McCracken Library, and Wyoming State Review Board for the National Register of Historic Places.

Her topic on the 18th will be “The Equality State: Wyoming Women Lead the Nation.”

The authors expressed their special thanks to the Tomahawk Hotel and Sidekicks for hosting the events and their work in advancing downtown development. Williams and Blasi see the release of Sweetwater Women as their contribution to the “Year of Wyoming Women,” celebrating the 150th anniversary of women’s suffrage in Wyoming.

Sweetwater Women is published through the Sweetwater County Museum Foundation, a non-profit organization that exists to support the museum. All proceeds from the book’s sale go directly to the Foundation. It will be available at the museum on Flaming Gorge Way in Green river and online at Amazon.com.

Celebratet the 150th anniversary of John Wesley Powell's  launch from Green River, Wyoming to begin his famous 1869 expedition down the Green and Colorado Rivers. On May 22-34, the University of Wyoming and SCREE will also host a Saturday University with several intersting speakers about Powell and his impact. See Powell150.org for more info or our Facebook and Instagram pages. The museum will also have a very special Powell exhibit up soon, also featuring artwork from UW! Watch our social media pages for more info. 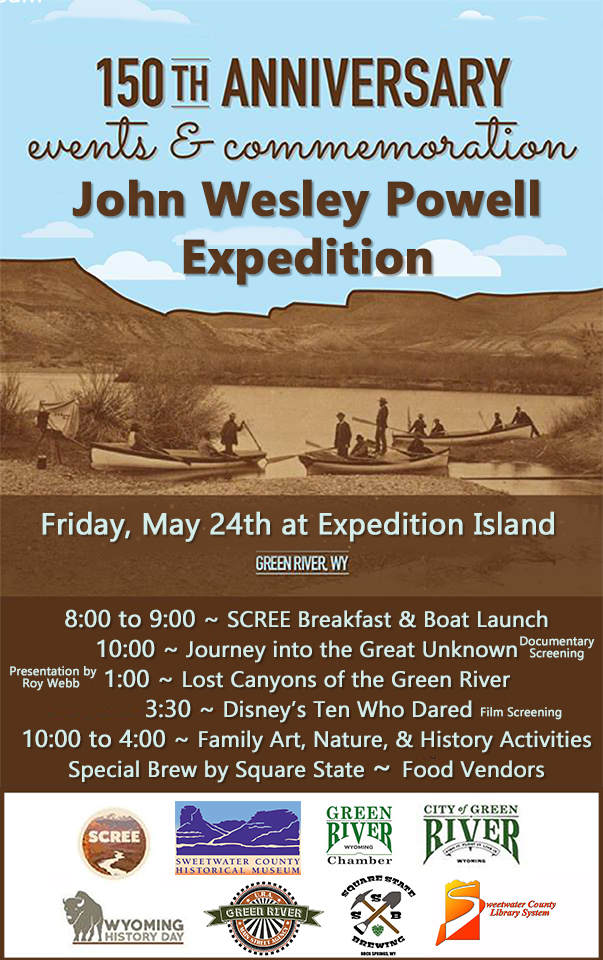